Back to Main Navigation 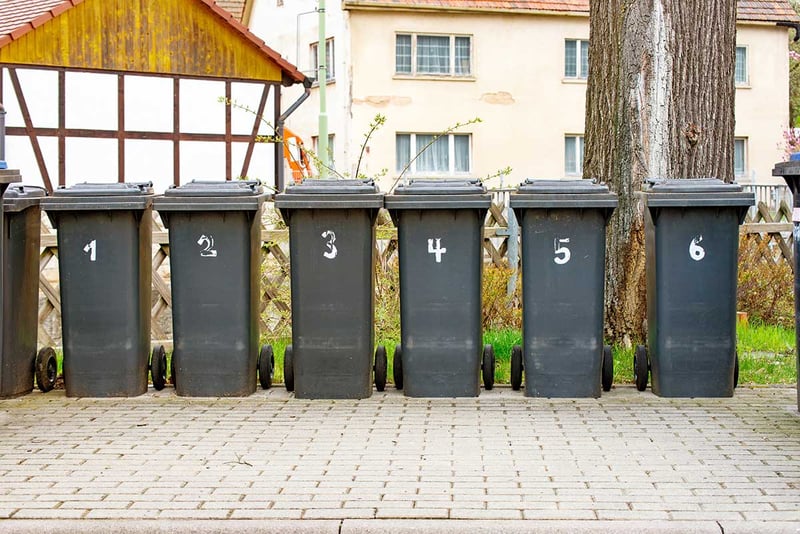 Sometimes it can seem like your HOA community has ridiculous rules. For example, many have rules about the placement of trash cans and how long they can be out at the curb. They may also have rules about the kind of trash and recycling bins you can have (in some cases, the HOA or their waste management company may provide them).

Believe it or not, there are good reasons for this, and not just because trash and recycle cans are unattractive. In some areas, there might be concerns about attracting wildlife (in fact, an HOA may require bear- or raccoon-proof bins). Another good reason not to leave your trash can out for too long is people going through the trash for bank statements and the like (ideally, you should shred anything with personal information before trashing it). Keeping trash cans in the garage or behind a high fence reduces the risk of anyone getting at your trash.

Because of these reasons many HOAs require trash cans to be out of sight, put out a certain length of time before collection, and then taken in within a reasonable time afterward. They also often have rules designed to prevent trash build-up, and may actually require that bins are put out on schedule to ensure that trash is removed. The rules may also enforce that trash cans are kept in the garage (this is a great way to keep wildlife and stray pets out of the trash cans). Generally, you will be required to put trash cans out no sooner than the night before collection and take them back in by the night after collection. Some communities may have tighter rules. If the rules are unreasonable for you, you may need to ask for a variance (for example if you work later in the day and they require the trash cans be put back in by 6 pm on collection day). These rules may also cover extra bagged trash and yard debris, including requiring double-bagged trash.

Asking for a variance on trash rules is always possible. The most common reason would be not being able to put the cans back on "schedule." (Most homeowners' associations are more reasonable and set a time that would be possible for any schedule). Another reason might be disability making it hard to deal with the trash cans.

For associations - it is perfectly reasonable to have rules regarding garbage cans. If wildlife is an issue, then the rules should allow for that. However, to avoid being "that" homeowners' association consider the following:

1. Don't set rules which require people to put trash cans out after dark. For some people, this may even be dangerous. It is very common for HOA associations to set 8 pm or 9 pm  the earliest time to set out a can - and this may be iffy for some people.

2. Make the deadline for putting cans back the next morning after pickup so that it doesn't interfere with any work schedules. Most people will put them back sooner.

3. Include compliance with local recycling ordinances in the garbage can rules, that way you can deal with somebody who is consistently putting recycling in the trash and vice versa and possibly getting you in trouble with your waste management company.

4. If you have disabled owners who have difficulty moving garbage cans around, consider how to grant them a variance that allows for their issues without leaving unsightly cans on the street. Would it be possible to set up a surround that hides the bins, for example?

Garbage can rules may seem  but are generally intended to improve aesthetics and protect owners from wildlife and thieves. Rules should be fair and reasonable and set so as to balance the needs of the neighborhood. If you are looking for more advice on setting proper garbage can rules for your community, contact GrandManors today.